In recent years, increasing attention has been paid to define the contribution of environmental agents in the pathogenesis of autoimmune diseases.

Studies have shown that genetic predisposition accounts for approximately thirty percent of all autoimmune diseases. The rest, 70 percent, are due to environmental factors, including infections, the environment we are surrounded, toxic chemicals, dietary components, gut health, etc.

Infectious agents have long been the most well-studied environmental factors. Some evidence suggests that bacterial infectious (Gram negative and positive), viruses (herpes simplex virus etc.), parasites and fungi may play a part in the development of autoimmune diseases. As we know, autoimmune disorders occur when the body’s immune system, which normally helps protect you against infections, instead turns against your organs and tissue.

Cigarette smoking has been linked to the development of multiple autoimmune diseases, including Rheumatoid Arthritis, multiple sclerosis, Graves’ hyperthyroidism, and primary biliary cirrhosis, among others.

Cigarette smoke contains several toxic stimulating compounds, which can elicit and innate immune response and it is one of the environmental factors in autoimmunity.

Ultraviolet (UV) light is a pervasive environmental exposure with pleotropic effects on the skin. Sensitivity to UV light is a shared feature of several autoimmune diseases, including systemic and cutaneous lupus erythematosus (SLE and CLE, respectively), dermatomyositis, and occasionally Sjögren’s syndrome.

Heavy metals (cadmium, silver, gold, lead, aluminium, mercury and more) have strong associations with autoimmunity by first inducing an immune response to the heavy metal itself.

Interestingly, research shows that genetics make us either predisposed to this disease process, or resistant to it happening at all. This is why heavy metal exposure does not always lead to autoimmunity in every person.

In addition, heavy metal exposure causes deterioration of the normal gut flora. Since 70% of the immune system is in the gut, this alteration can also trigger autoimmune disease in a similar way as described above.

Human gut microbiota is composed of about 100 trillion microorganisms. The impact of gut microbiome dysbiosis in the pathogenesis of autoimmune disease is evident from an increasing number of studies. These studies support the striking linkage of altered microbiota composition with the onset of several autoimmune disorders, including SLE, multiple sclerosis, RA, systemic sclerosis, inflammatory bowel disease (IBD) and ulcerative colitis.

Apoptosis and autoimmunity are two phenomena, which share essential similarities in destroying cells. However, apoptosis is a normal process, while autoimmunity is not. Apoptosis could, at least in some conditions, cause autoimmunity. The failure to appropriately achieve programmed cell death and to clear apoptotic cell fragments is discussed as a key pathogenetic factor leading to autoimmunity.

It is well known since times immemorial that nutrition not only plays an important role in the general development and well-being of a person but also the immunological status and susceptibility or protection from a disease.

Nutrient deficiencies can play a huge role in autoimmune disease too. For instance, role of vitamin D is emerging as a key nutrient that pre disposes to autoimmunity as its levels are deficient in various autoimmune diseases; multiple sclerosis, SLE, psoriasis etc. 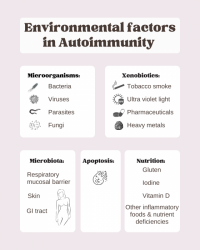 One of the best way to start improving your health is to look for the causes of your symptoms instead of suppressing your symptoms with medication. Find your triggers and stay away, if possible.

If you’ve found this article useful, and perhaps you need further in-depth professional advice, then please call on 07510911068 or fill in the contact form to book an appointment today.